In photography, to create an image that has never been created before without a Hollywood-sized budget or extensive retouching in Photoshop is a rare thing indeed.

Over the last few years, I have been experimenting with the Hypersync capabilities of the Elinchrom Ranger RX Speed AS pack along with the Ranger S flash head when using the PocketWizard ControlTL transceivers. 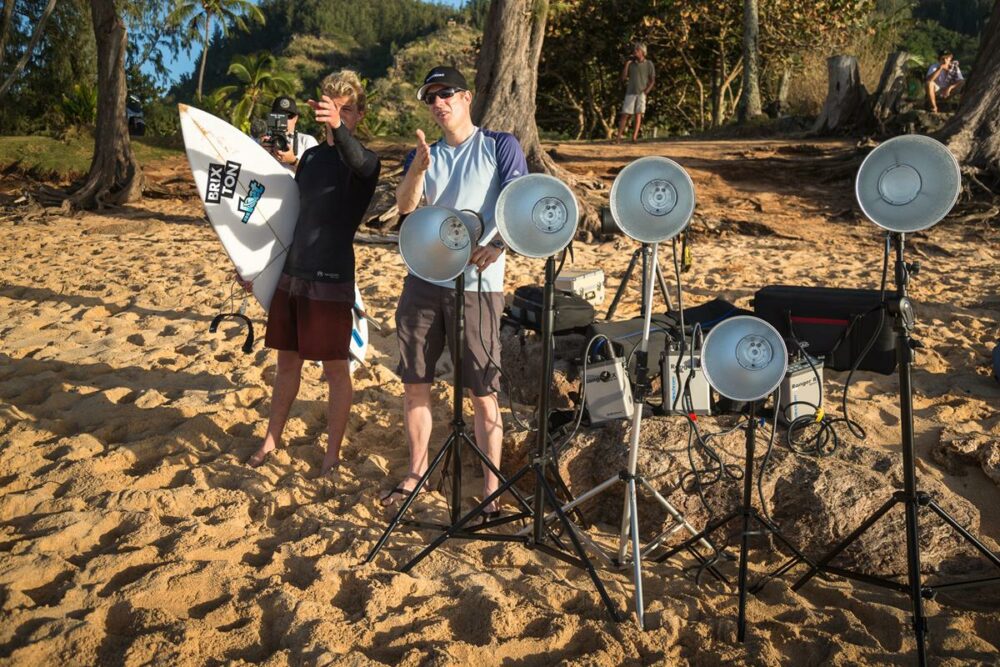 Ever since I first started playing with Hypersync, I have dreamed of being able to overpower daylight and light up a surfer on a wave from a far distance.

I tried it out in Tahiti with mixed results three years ago, but this year, with the help of Elinchrom and PocketWizard, I was able to pool the extensive gear needed and head out to Hawaii to give it another try. As you can see in the image above, we pulled it off. As far as I know, this is the first image ever created of a surfer on a wave that was lit with strobes from 500-feet (150 m) away. To put that in perspective, the light from the strobes traveled a distance equivalent to 1.4 football fields and overpowered daylight (with the help of a cloud).

To make this experiment possible, Elinchrom graciously shipped four Ranger RX Speed AS packs, four S heads and four high performance reflectors half way around the world to the north shore of Oahu.

I brought with me one extra Ranger setup, which made for a total of five Ranger packs and heads. With this setup we had 5,500 Watt/Seconds of lighting power at our disposal. Additionally, PocketWizard sent four extra Power ST4 transceivers to go on top of the Ranger RX Speed AS packs so that I could trigger all five packs using Hypersync with the PocketWizard Flex TT5 transceiver.

In my experiments shooting ice climbing and other sports with one flash head, I found that I could consistently overpower the sun from 60 to 70 feet (20m) away. In shaded conditions, as with my latest ice climbing shoot, I was able to light up the bottom of a gorge almost 200-feet (60m) away with one Ranger pack and head. With that in mind, I imagined that I could light up a surfer on a wave at up to 500-feet (150m) away with five Ranger packs and S heads working together.

It took some trial and error, and a few extremely helpful assistants, to actually make this work.

“With this shoot, we were being very ambitious!” 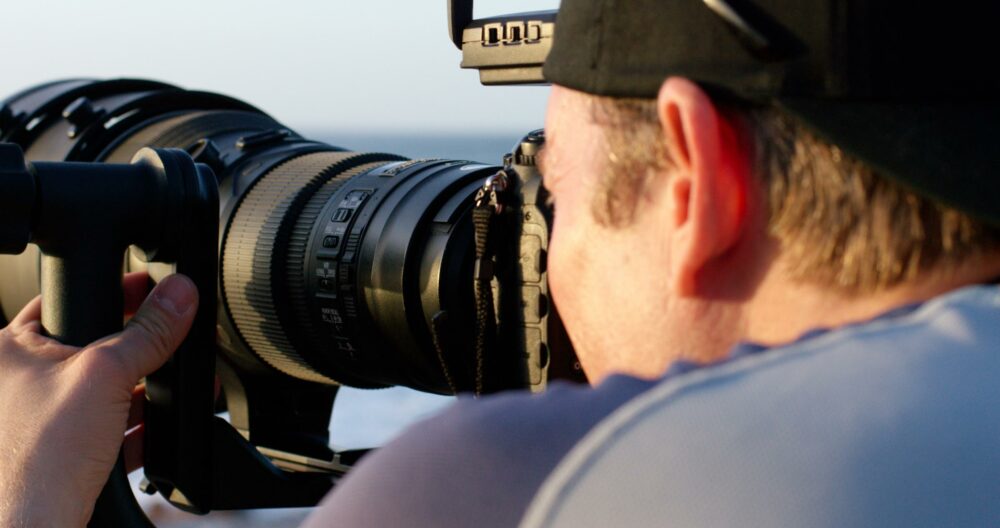 For this shoot, I hired pro surfer Tommy Ihnken, who lives on the north shore of Oahu. The waves on the day of the shoot weren’t exactly what we had hoped for; they were a bit unpredictable and small, but Tommy is known for catching some big air and he was keen to give it a go. We opted to shoot at Rocky Point, which is a surf break known for huge airs off medium sized waves. Along with me on this shoot were three assistants: the legendary surf photographer and my good friend, Brian Bielmann, Ben Reed and Robin Dabney. All three were indispensable on this assignment.

As one of the top surfing photographers of the last 35-plus years, Brian told me that he had seen several photographers try to light up a surfer on a wave with strobes on the beach but they never had any luck unless they shot at night and only from about 60-feet away. Hence, with this shoot, we were being very ambitious.

Once we got all of the gear to the beach and got set up, we had two and half-hours of daylight to work with. The surf conditions were the best they were going to be that week and we went to work setting up the Rangers and testing everything out. Tommy got in the water and we started shooting. For the first hour we got nothing of note. Not a single frame. With full sun hitting the surfer, I could see that in a few shots we were filling in the shadows but we were not actually overpowering the sun. We realized that the high performance reflectors, when used from that distance, were like lasers and that the light was going right past Tommy for many of the shots because he was moving all over the place with the waves. The next step was to have two assistants direct the flash heads, moving them with the surfer, so we could make sure we were hitting the surfer with the lights. After a few tries, we got some images where we could see that the lighting was working. Now we just needed to wait for something interesting to happen.

Within a few minutes of putting two assistants on the flash heads to move them in tandem with the surfer, the sun dropped behind a thinly veiled cloud and Tommy caught a decent air, one of only three he was able to get over the course of the entire shoot. In that moment, everything came together and helped us created the shot at the top of this page. With the strobes firing at full power I only got one image per shot, and the fact that the timing was perfect for this image is a small miracle. There are so many things that had to come together to get this image. It still boggles my mind that we actually pulled it off. Brian was pretty amazed that we even got it to work, much less that we got an action shot. After we got “the” shot, I kept shooting for another hour or so. In that time we got several other shots that were fully lit but none of them measured up to the shot above.

To capture the image I shot with a Nikon D4, a Nikkor AF-S 400mm f/2.8 telephoto lens and a 1.4X Teleconvertor. This setup resulted in a 560mm f/4 lens. The exposure for the resulting image was 1/1,250 sec at f/4 at ISO 800. Because we were shooting wide open the lens had to have exceptional autofocus – and as you can see, it performed flawlessly. Gauging the distance of the surfer from the strobes was a matter of looking at the focus marker on the lens, which indicated a distance of about 500-feet. My shooting position was approximately 60 feet to the right of the strobes on the beach and basically in line with the flash heads. 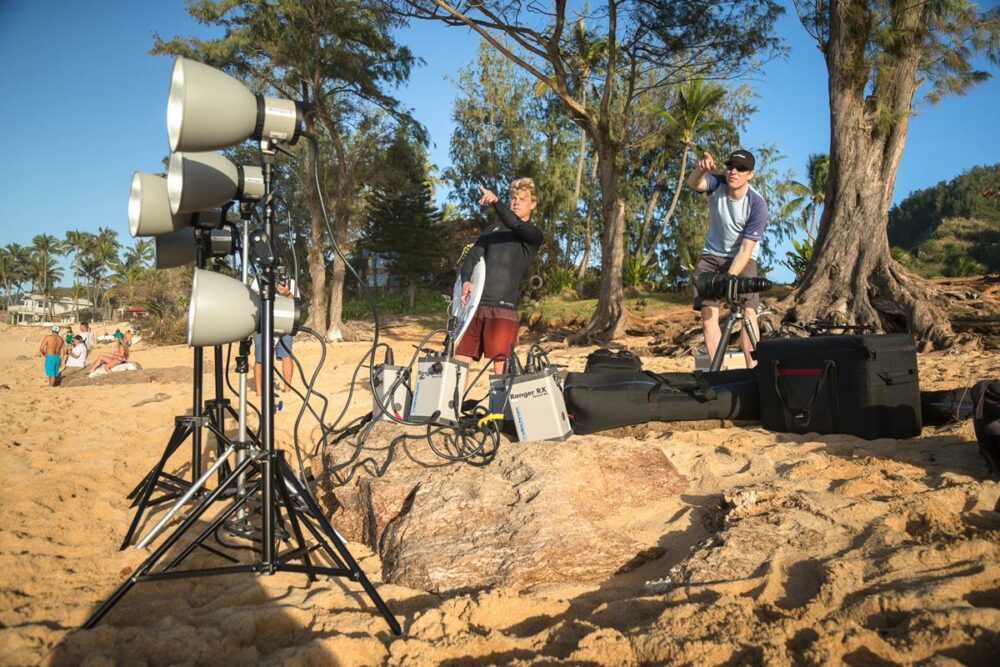 “I don’t know of any other battery strobe on the market that could have created this image!”

While I don’t consider this to be the best surfing image I have ever created, it is certainly different from any other surfing image I have produced and is not a bad shot by any means. As a proof of concept, it illustrates how Hypersync, when pushed to extremes, can be used with the Elinchrom Rangers to create images that never existed before. In fact, I don’t know of any other battery-powered strobe on the market that could have created this image. The Rangers are in a class of their own when it comes to their Hypersync capabilities and overpowering daylight from far off distances.

My thanks to Elinchrom and PocketWizard for believing in this project and for sending out the extra gear to make it happen. My thanks also to Brian Bielmann, Ben Reed, and Robin Dabney for helping me on this project – and especially to Ben Reed for filming the Behind the Scenes video. Without the help of these two companies and the assistants this image would not have been possible. 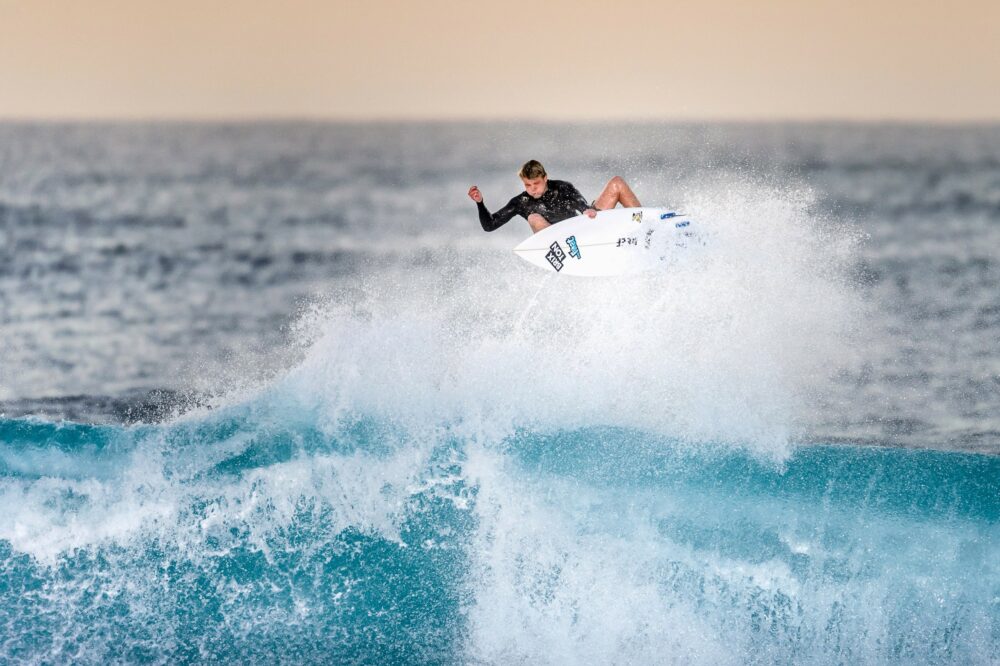