In 2011, while ice climbing in Ouray, Colorado at the Ouray Ice Park, I met Dawn Glanc, one of the strongest female ice climbers in the world.

The following year, in 2012, I set up a portfolio shoot with Dawn where I lit the ice climb she was on from above with an Elinchrom Ranger RX Speed AS battery-powered pack and the Ranger A “Action” head. 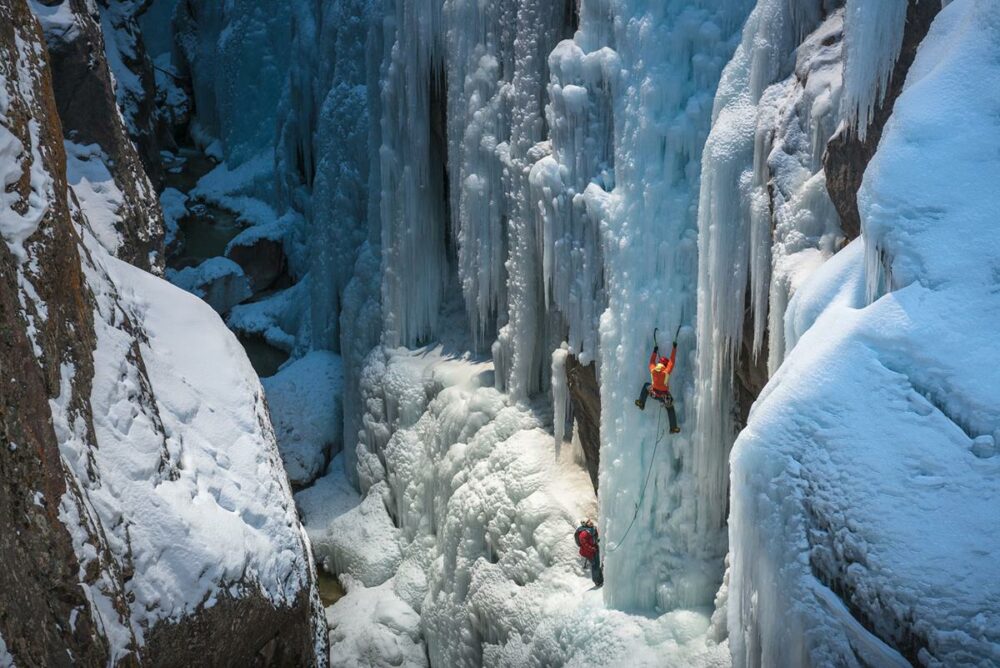 The resulting images were very well received and I was able to license several of the images to a wide variety of high-end clients.

That same year, I also I started playing with Hypersync flash technology. I first tried it out in Tahiti while shooting surfing. I was able to light a surfer on a wave while shooting from a boat nearly 100-feet (30m) away. There were many variables on that shoot, which didn’t allow me to actually get the image I wanted, but the seed was planted in my brain for future experiments.

With more experimentation, and a marked improvement in the Hypersync technology, I was able to reliably overpower daylight from 60 to 70 feet (20m) away using the Elinchrom Ranger RX Speed AS pack and the Ranger S head along with the high performance reflector. 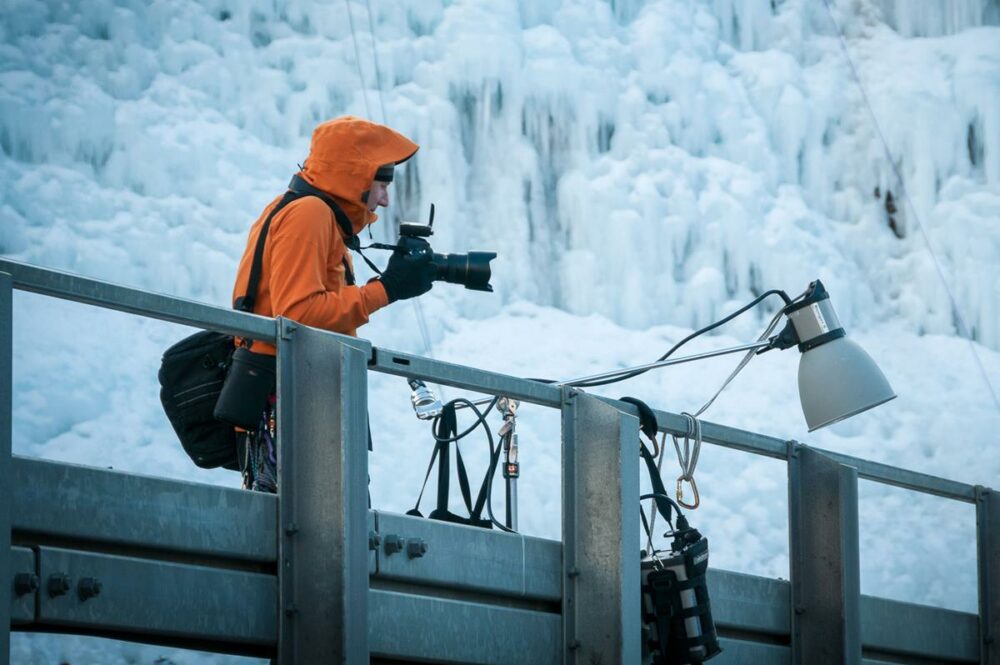 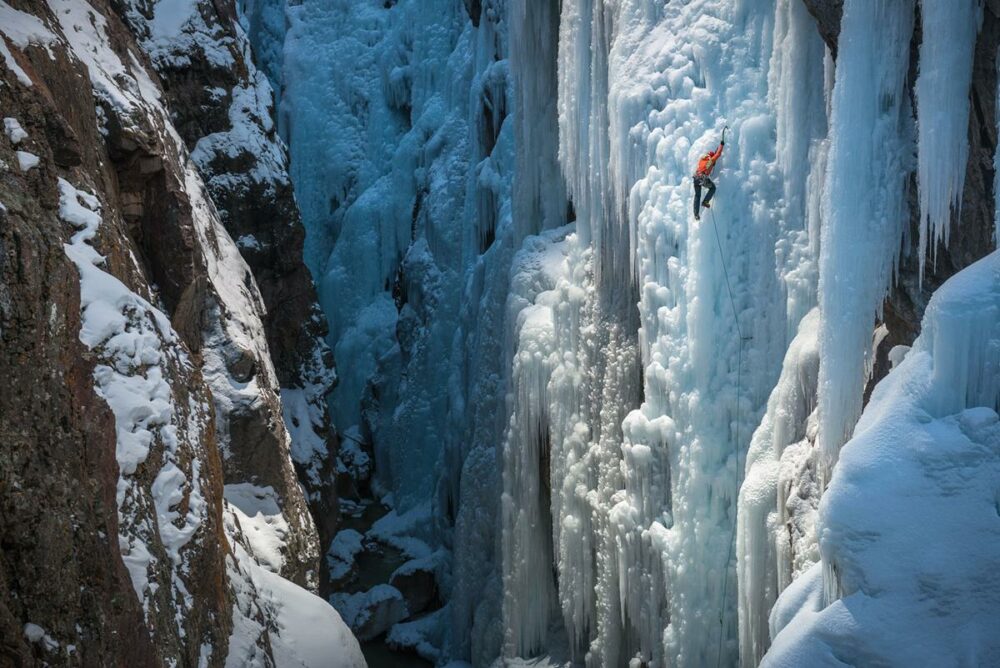 Having gotten Hypersync to work reliably, my mind started spinning with ideas for possible shoots. One of the first thoughts I had was to go back and shoot ice climbing with Dawn, but this time using Hypersync.

Fast forward a few years, to this January, when I had some free time for another portfolio shoot. I planned another ice climbing shoot with Dawn in the Ouray Ice Park and I was hoping to improve on my previous outing. I took with me the trusty Elinchrom Ranger RX Speed AS pack and the Ranger S head this time, along with the PocketWizard ControlTL transceivers that make Hypersync possible.

After shooting with Dawn in a few different areas of the park, I set up the Ranger and a flash head on the bridge that spans the gorge above the ice climb. I set up the flash head and the high performance reflector so that it created a shaft of light on the intended ice climb. I dialed in the exposure settings by using the histogram on the back of my camera.

Having tested out my settings the day before I was able to get near perfect illumination of the ice climb in the first shot. Once Dawn and her sister Kristi rappelled into the gorge, it was go time. I moved around and shot from various angles above and to the side of the climb from the opposite side of the gorge. I also shot with telephoto, standard and ultra-wide angle lenses so that I had every possible variation. 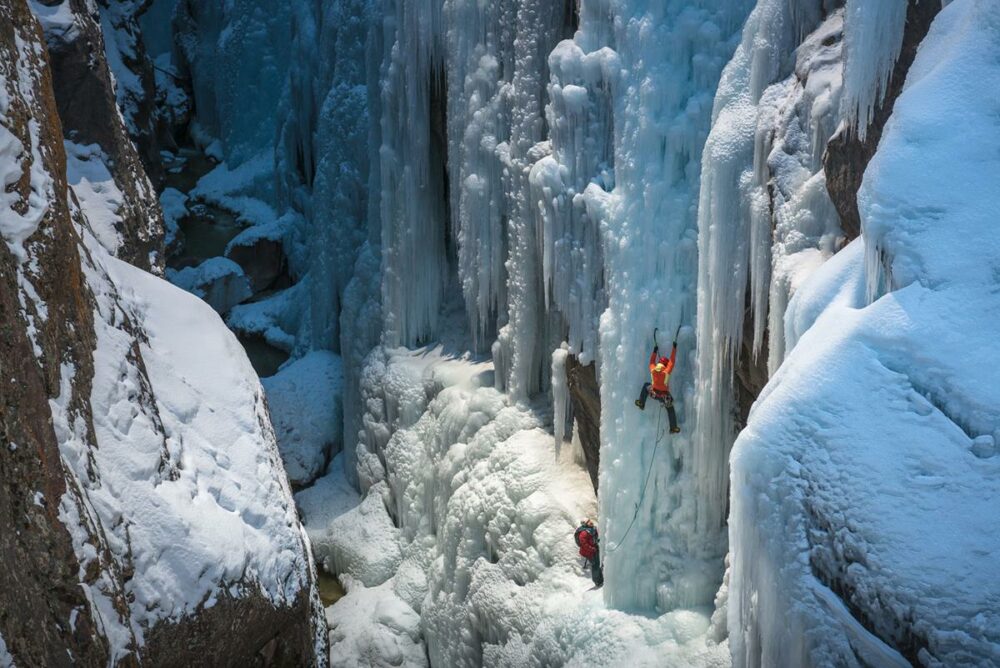 For these images, I shot at around 1/1,000 second at either f/5.6 or f/5 at ISO 400 for the entire shoot. With the shaded nature of ice climbing, the Hypersync setup was reliably lighting the entire climb all the way to the bottom of the gorge 165 feet (50m) down.

I shot over 230 images as Dawn made her way up the dead vertical ice climb. Because I was shooting at such a high shutter speed, this allowed me to move around much more easily and capture a greater variety of images than on my previous outing, where I had to use a tripod.

As a side note, I would expect the high performance reflector to be a very hard light and generally it is, but in this instance, with the light bouncing into the ice and flying all over the place the light quality was softened quite a bit. On other shoots, where I have used the high performance reflector, I am constantly amazed at how nice the light quality generated by this metal reflector can be and especially how subtle the light fall off is towards the edges of the beam. 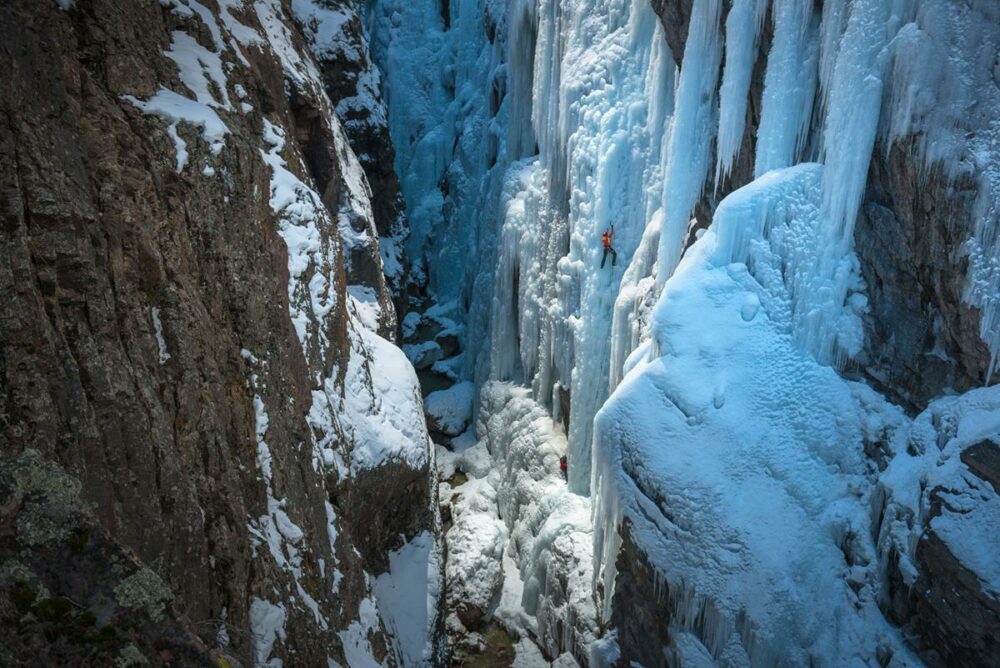 In the end, the results were stunning. I can say unequivocally that these are the best ice climbing images I have ever created and they wouldn’t exist without the Hypersync abilities of the Elinchrom Ranger.

I don’t think there is any other strobe on the market that has the power and the ability to overpower daylight (or in this case the open shade) as the Ranger Hypersync setup did that day. This shoot has inspired me to try applying Hypersync flash to many other hard to illuminate sports. Hypersync has opened up a whole new world in terms of what can be lit – without a Hollywood movie budget.

I am very excited to see how far I can take it by creating new and exciting images that have never been done before.