From conflict to conservation

After finding herself at a personal crossroads, photo-journalist Ami Vitale decided to dedicate herself to seeking out and photographing sources of hope around the globe. 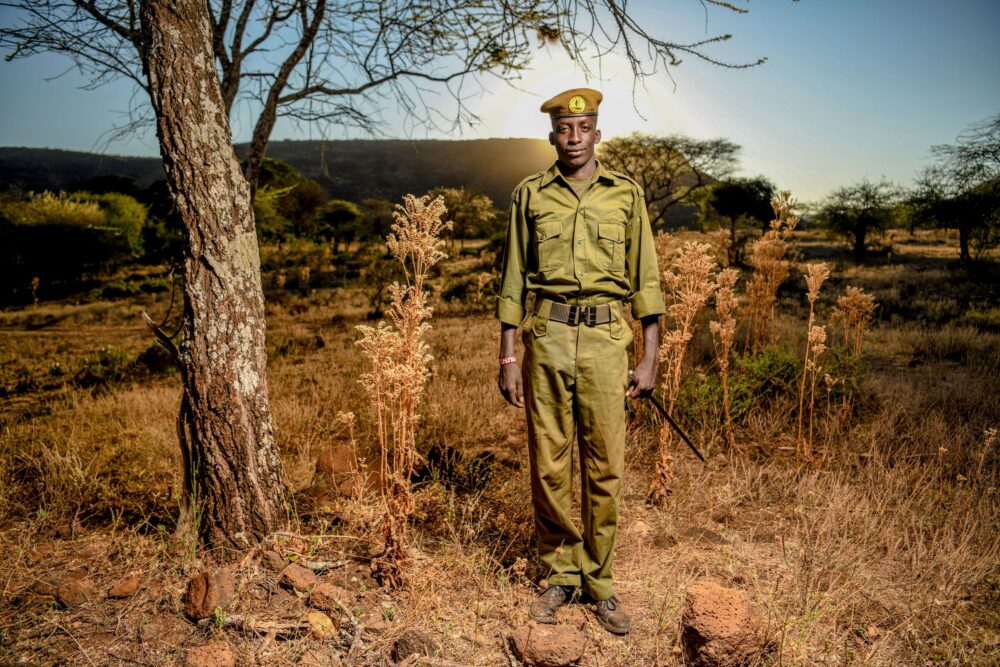 “I was burned out and depressed,” she recalled, “so I took a break and during that time discovered that, as journalists, we often talk about the challenges of the planet but do not always discuss the solutions to these challenges. I realized that without shining a light on and amplifying the voices of those people who are making positive changes, we are only telling half the story.”

While Vitale is a Nikon Ambassador and a National Geographic contract photographer, she usually researches her own stories and, indeed, has found sources of hope around the globe.

She works with a community in northern Kenya, the Reteti Elephant Sanctuary, the first ever community-run elephant sanctuary in all of Africa. They started with one elephant two years ago and now have rescued over 30 orphaned elephants. Vitale collaborated with musician Dave Matthews to create a program that got over 24,000 people engaged and contributing to the Sanctuary. 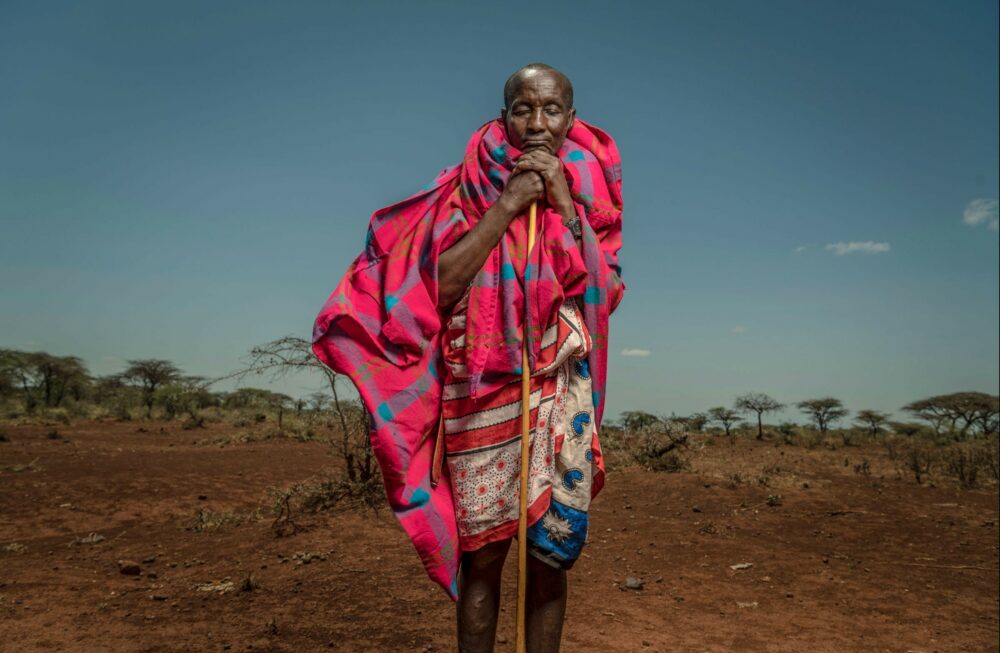 “Without shining a light on and amplifying the voices of those people who are making positive changes, we are only telling half the story.” 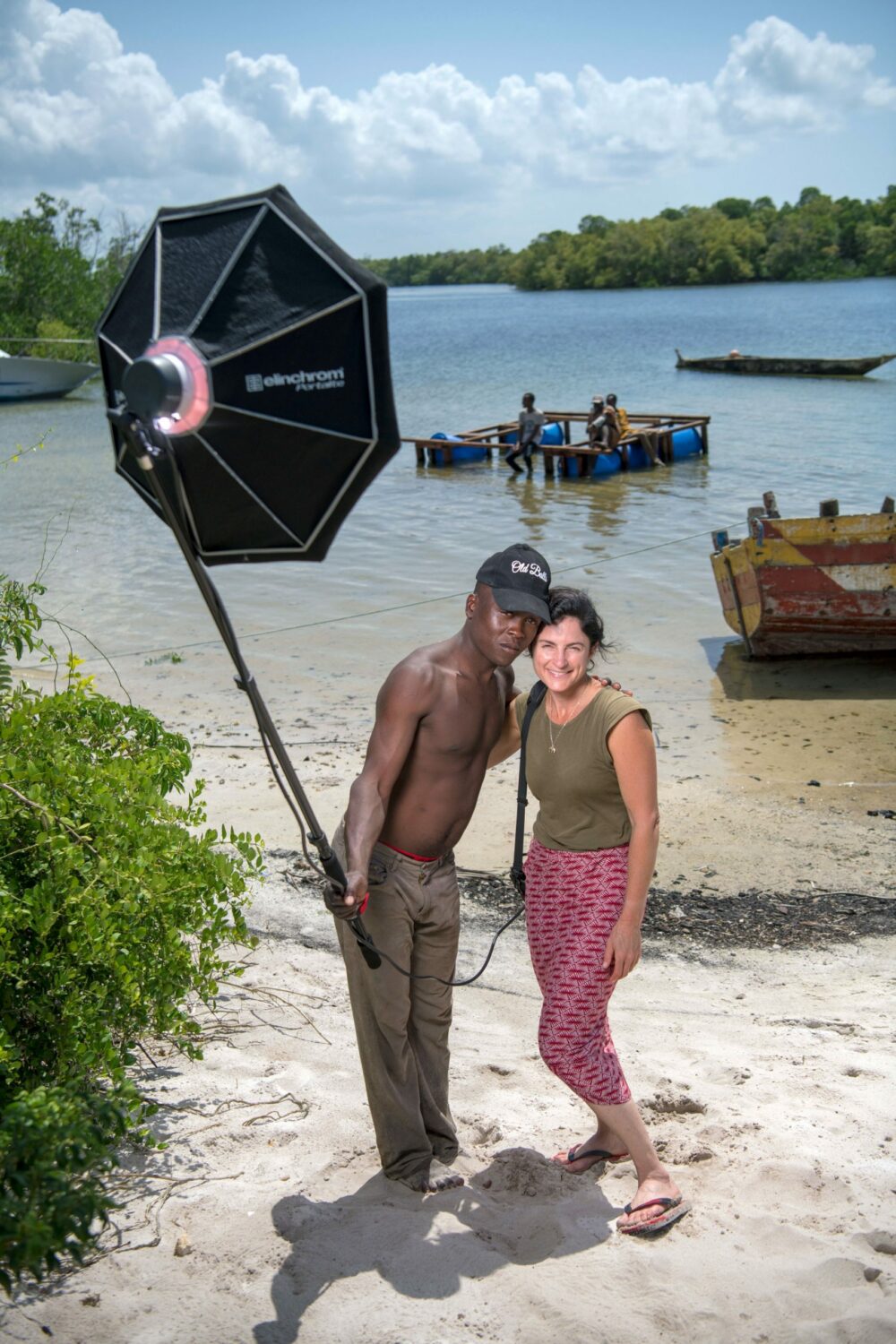 But saving the elephants is only part of a much larger picture that impacts the environment and the people who live there. The fact that the Samburu went from once fearing elephants and are now the animals’ greatest protectors shows how a community—with little power and money—can change the destiny of their own future.

Vitale adds that “It makes me realize the power of individuals to create positive change.”

At the same time, the Sanctuary has had a “ripple effect.” Reteti is the first sanctuary to hire indigenous women to care for the elephants and, in fact, the head keeper is a Samburu woman.

Vitale recalls that on her last trip to Kenya, a group of Samburu warriors hiked 12 miles in blistering heat to visit the Sanctuary. When asked why they said that they heard stories that women were working with elephants and they had to see this with their own eyes. “They couldn’t believe it,” Vitale says.

What’s happening without any fanfare is incredible and it’s changing the way the community relates not just to wildlife, but also to each other. 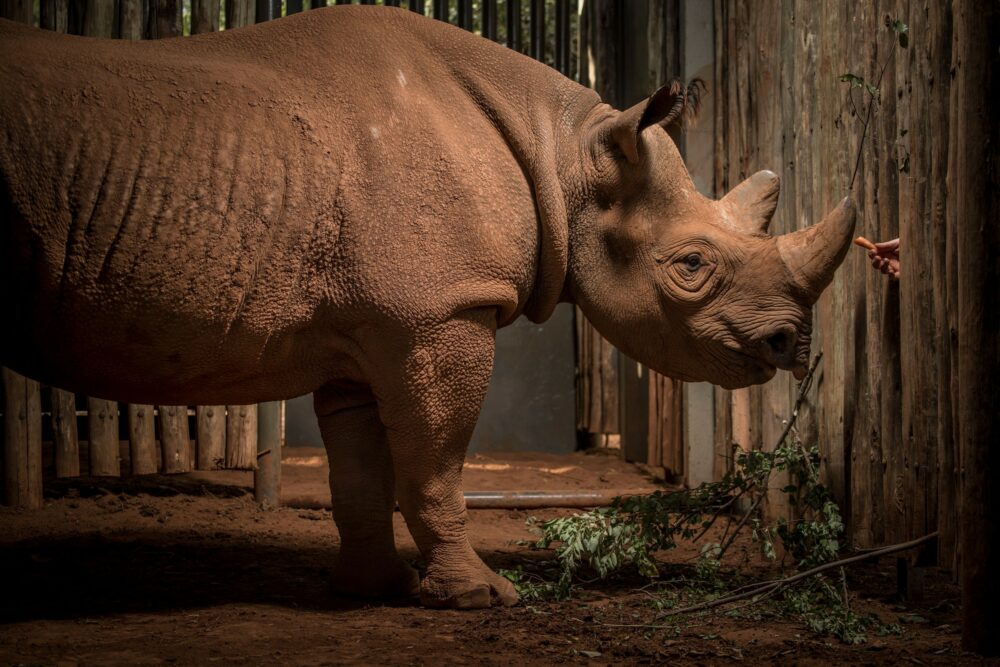 That’s only one of the many stories Vitale has been working on over the years. What started out as a career photographing violence and conflict is now all about wildlife—pandas, elephants, lions, giraffes, rhinos! “It’s been an inspiring transition. After all the horrors of the world, it’s wonderful to see more hopeful things.” Vitale explains.

Recently, Vitale escorted Eric, an 8 year old eastern black rhino (pictured below), from the San Diego Zoo Safari Park in California to the Serengeti in Tanzania—a trip that covered 10,000 miles across five countries (and took 68 hours). 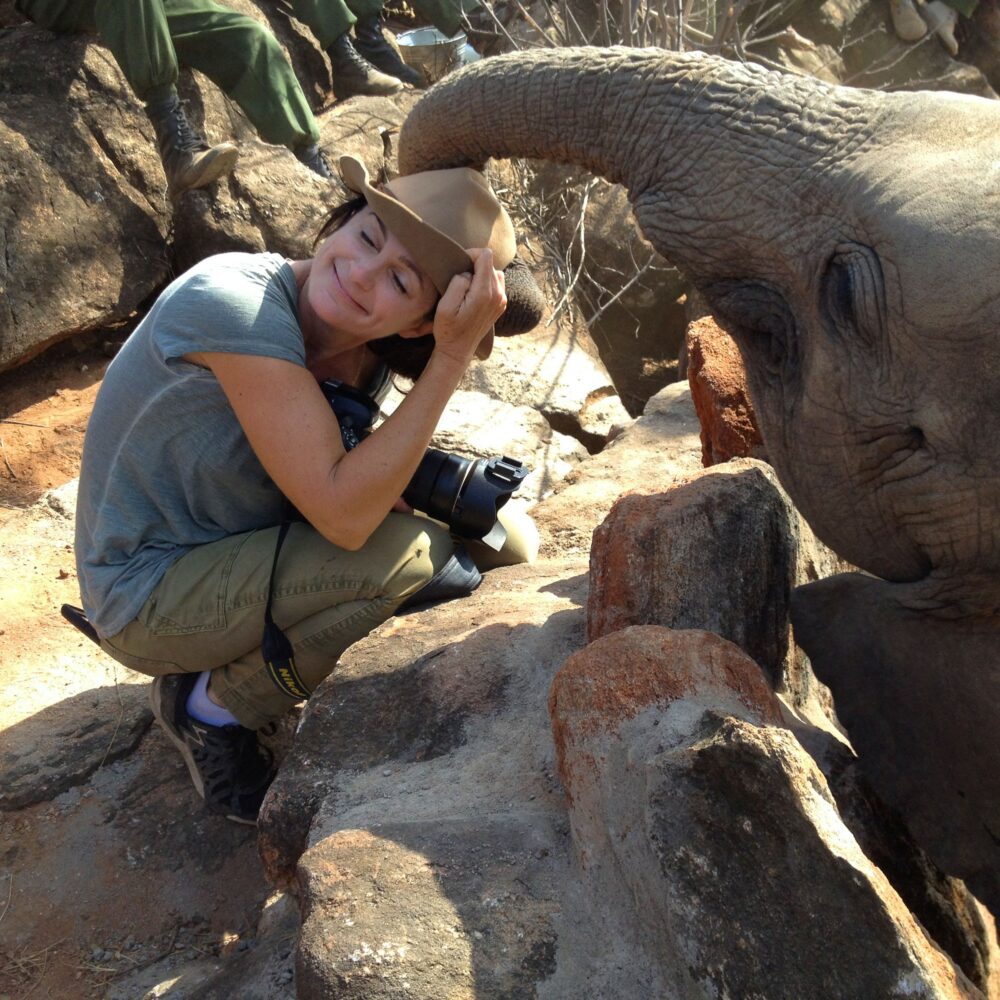 Vitale generally shoots with available light but she quickly realized that she needed a good lighting system.

Programs like the one that brought Eric to the Serengeti represent the efforts of local communities to help ensure that wildlife and the ecosystem they—and we—are a part of flourish and that the tragedy of Sudan and the extinction of the northern white rhino doesn’t happen again. 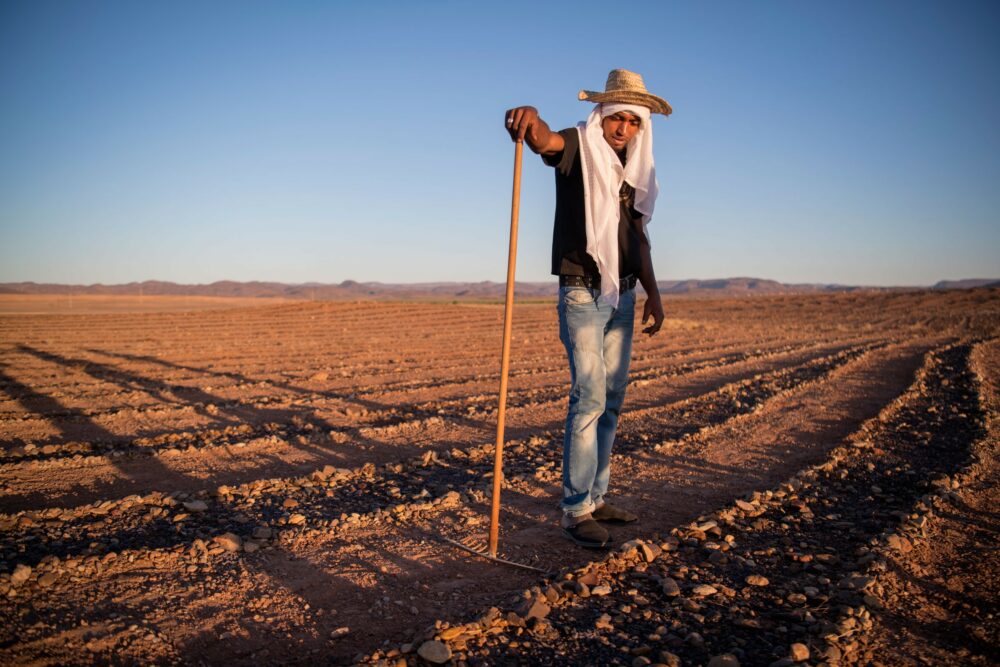 Vitale’s work is so well-respected that she was asked to photograph the 2019 Lavazza Calendar titled “Good to Earth.” @lavazzaofficial #GoodToEarth.

Photographers of previous years’ Lavazza calendars have included Platon, Helmut Newton, David LaChapelle, Steve McCurry and Annie Leibovitz. “I am humbled and honored to follow in their stead,” says Vitale. The calendar debuted internationally in November 2018.

A friend recommended the ELB 500 TTL for their quick setup. 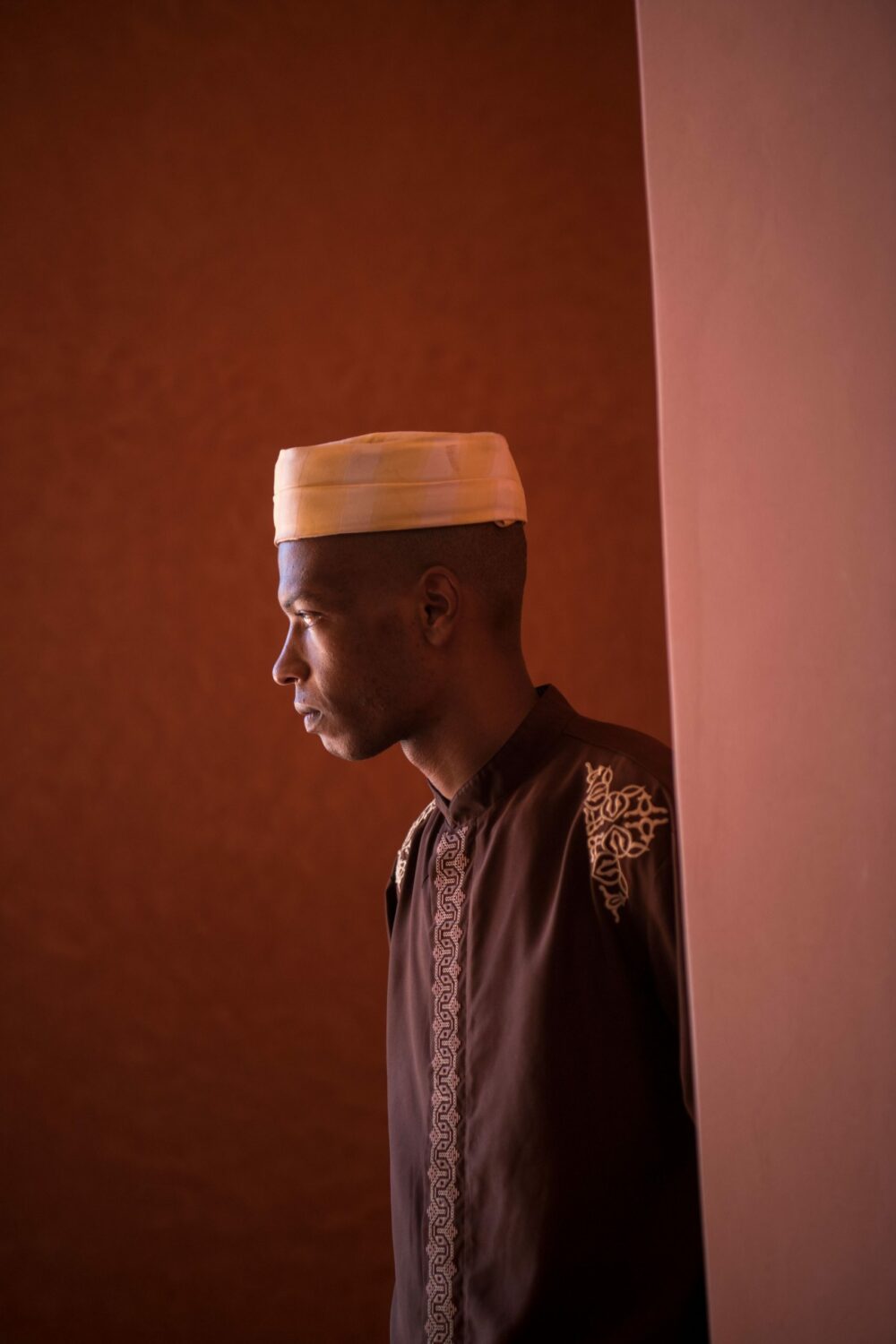 When she got the assignment to take portraits of people who are contributing to the good of our planet, Vitale—who generally shoots with available light—quickly realized that she needed a good lighting system.

She knew she’d be photographing in demanding conditions and needed a setup that could accompany her from the glaciers in Switzerland to the Sahara desert in Morocco to flooded mangroves in Kenya where she’s shooting up to her neck in water.

A friend recommended the Elinchrom ELB 500 TTL’s for their quick setup. After asking around, Vitale discovered that portrait photographers were using these lights as well.

“It is so small that it’s not intimidating to the people I’m photographing.”

As it turns out, the ELB 500 TTL was the perfect choice for Vitale and her often unique requirements, including the ability to withstand harsh conditions. For her recent travels with the ELB 500, Vitale took a single light and a Portalite Octabox, which still allowed her to travel as light as she usually does with a small carry-on roller and a camera backpack, in which you’ll find a Nikon D850, Nikon Z7 and assorted zoom and prime lenses.

But the Elinchrom system’s small size and light weight is critical for Vitale outside of packing since she can be found carrying her own gear, traveling only with a translator while hiking through deserts and making her way to other remote places: “It’s physically challenging to get to some of these places and the last thing you want is a huge, heavy setup. It is also so small that it’s not intimidating to the people I’m photographing.”

“Within just a minute, I was able to set up the whole system.”

The simplicity of use of the ELB system is also key for Vitale. “I was impressed that you don’t have to be a tech genius to use the ELB 500’s. They’re so intuitive and easy to use.”

Part of that simplicity and ease of use is how quickly the light can be set up. “What blew my mind was in the middle of the desert, this camel herder came walking by and within just a minute or two I was able to set up the whole system and create a series of shots before the fast-moving subject went on his way.”

Her translator did double-duty as an assistant and held the ELB 500 TTL on a light pole as she worked. 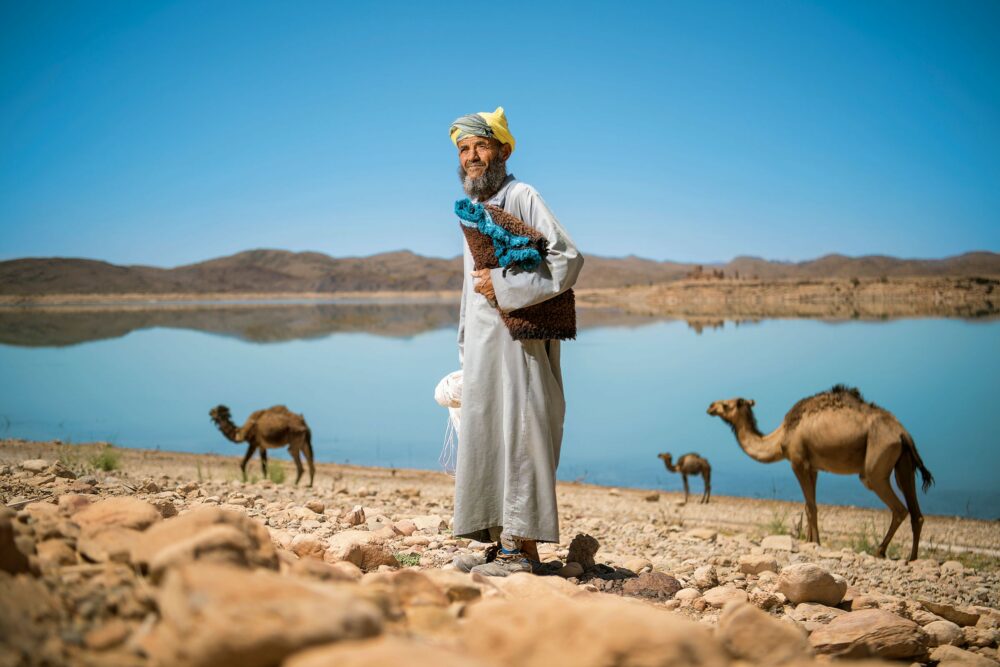 When you figure that most of the people she photographs in these remote locations have never seen a camera let alone a lighting setup, the ELB 500’s again work in Vitale’s favor. “I can’t bring a huge lighting setup. It scares people and changes the way they behave” in front of the camera.

“The ELB 500 TTL didn’t make people feel uncomfortable,” she says. “That’s the main thing; that they don’t stiffen up and they feel comfortable.”

The biggest impact the ELB 500 TTL’s have had on Vitale’s work is the ability to create beautifully lit images in harsh, middle-of-the-day light.

“This is so exciting to me because I would never have considered taking pictures at high noon in the blistering heat of Africa. I would wait for the beautiful light in the morning or the evening.” But with the ELB 500 TTL and its HSS technology, Vitale was able to shoot wide open at f/2.8 at 1/5000th second to overcome the bright sunlight and create “beautiful images where the light looks natural.” 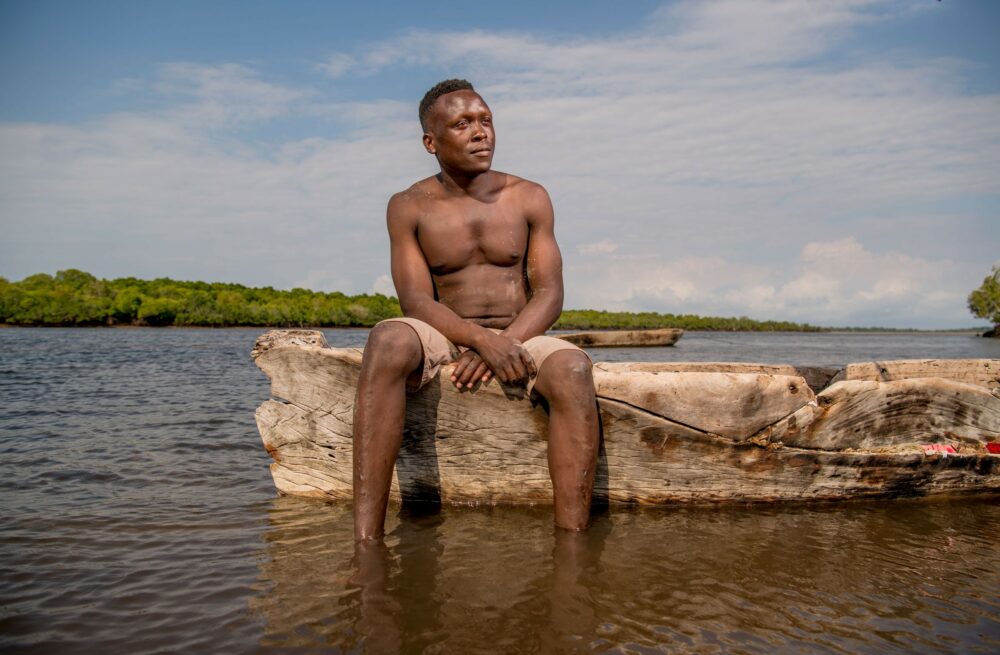 “The ELB 500 TTL’s will be with me always, I always need beautiful portraits of people and the lights just opened my eyes to having a high powered, simple setup and what you can do with it.

The lights provide me with so many more opportunities! They are changing how I shoot.” Vitale concludes.

“The lights provide me with so many more opportunities! They are changing how I shoot.”

Vitale has just come off a whirlwind of travel and speaking engagements stopping just briefly at her home base in Montana for 24 hours before heading off to Niger, among 5 other countries, to find one more story of hope where a community brought giraffes back from local extinction.

“In a world of 7 billion, we need to start recognizing that we are not separate from nature. When we see ourselves as part of the landscape and part of nature, then saving nature is really about saving ourselves.”

The Unusual Difficulty Of Photographing Pandas

Warriors Who Once Feared Elephants Now Protect Them