Tristan Shu is a professional photographer based in Annecy (France), specializing in adventure and extreme sports photography, as well as lifestyle and portraits.

Tristan always produces intense, raw images of athletes in their natural habitat, and pushing their sports to the limit. In today’s interview, Tristan describes his latest adventure, photographing an athlete flying in a wingsuit over the Alps. 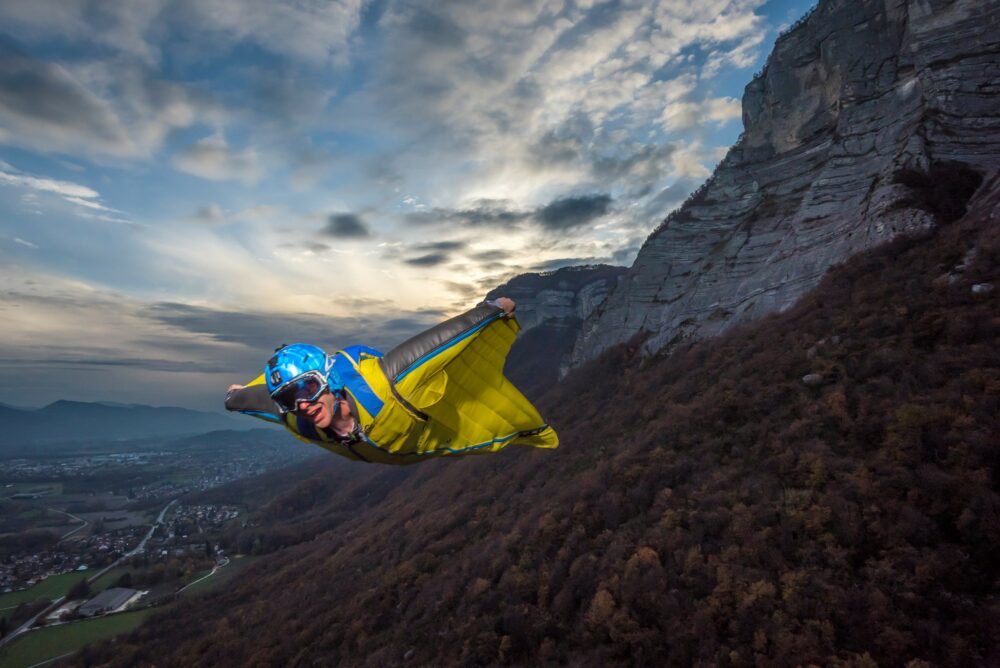 How did you come up with this idea for a shooting?

I’ve been thinking about flashing a wingsuiter for many years now. I’ve started by photographing paragliders, but even though this was far from simple, it was still less complex of a task than photographing actual wingsuiters.

By delving further into this world, it allowed us to refine our technique and solve common problems we’ve experienced before with flash photography. To set up this shooting we used the same strategy as when we realized our other paragliding photos.

Once we’ve decided to go on with the wingsuit photoshoot, it went by quite quickly, only a few phone calls here and there, and we were ready to go!

We went to Saint Hilaire’s spot, near Grenoble (France) for a day, and the best photograph was taken after the fifth jump.

“There are not a lot of people with whom I could have taken this picture.”

How did you took the photograph?

I was suspended from a two-people paraglide, from behind, facing the opposite direction. This positioning was quite challenging for take off and landing, much more difficult than on a tandem paraglide. However, it allowed me to face the wingsuiter when he flew by my side. The pilot of the paraglide was also holding the flash, which drastically complicated his maneuvers. There are not a lot of people with whom I could have taken this picture; you must really trust the pilot and the wingsuiter. Nevertheless, by being suspended beneath the pilot, and having the wingsuiter flying close by, it truly enabled to fire the flash properly so that we could obtain an interesting lighting.

You only had one chance per jump to flash the wingsuiter. How did you manage to trigger it at the right time?

Wingsuiters generally fly between 100 and 150 km/h (62 to 93 mph). This is why it can be quite tricky to take their photo at the right time and with proper lighting. During the 4th flight, I took the wingsuiter’s photograph a bit too soon, timing-wise, which was quite disappointing as the lighting was excellent. I spent the whole ride back to the jumping point ruminating on this error for which I was at fault, as all the previous shoots were perfectly timed. After failing once, I stayed focused on the next flight to fire the flash at the proper timing, and it worked!

“This photoshoot was impossible to make with a normal flash synchronization.” 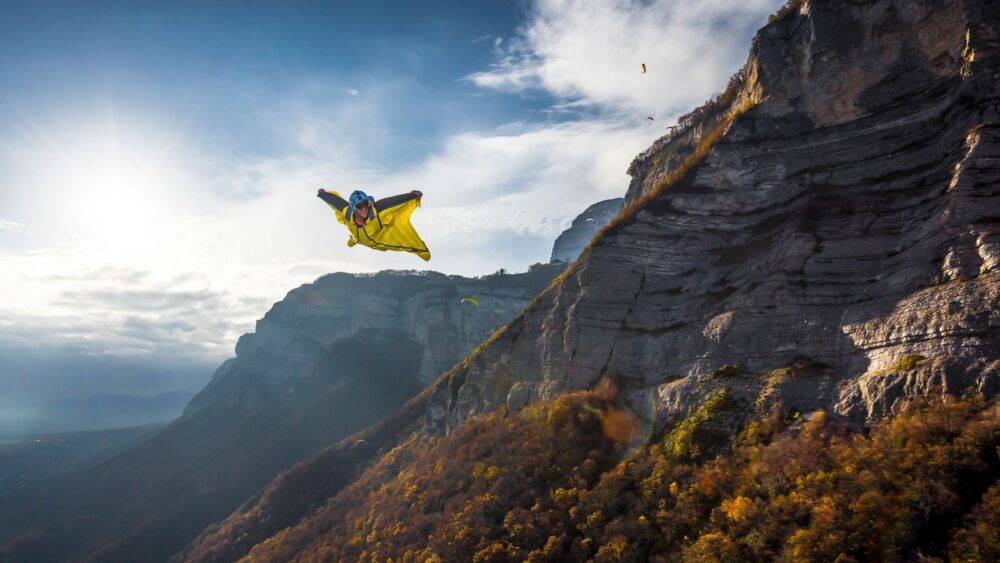 What are the technical limits that prevent you from realizing such a photoshoot?

In terms of techniques, this photoshoot could not have been possible with a normal flash synchronization, such as a 1/250 limit. The HSS also would have taken away too much power in my case. Only the HyperSync and Elinchrom’s latest Hi-Sync technology with the new Skyport Plus HS made it work.

The wingsuit really flies close to you, how do you deal with danger in this situation?

I have complete faith in both the pilot of the paraglider, Maxime Chiron, and the wingsuiter Guillaume Galvani. They are very close friends of mine, with whom I regularly shoot. I do not feel like taking risks with them, as we all know exactly what we have to do. And thus, I can take my time focusing on the viewfinder of the camera. The wide angle makes us feel that everything is further away than it actually is 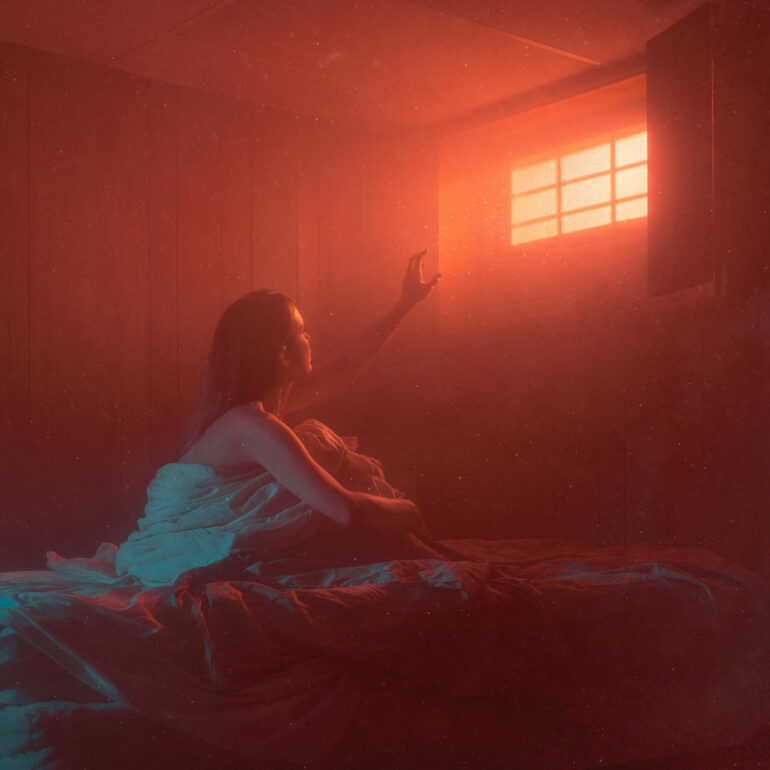 These photos feel like they have been pulled from a film. If you’re a fan of storytelling and moody, cinematic imagery, then you will love Aakaash Bali’s work. 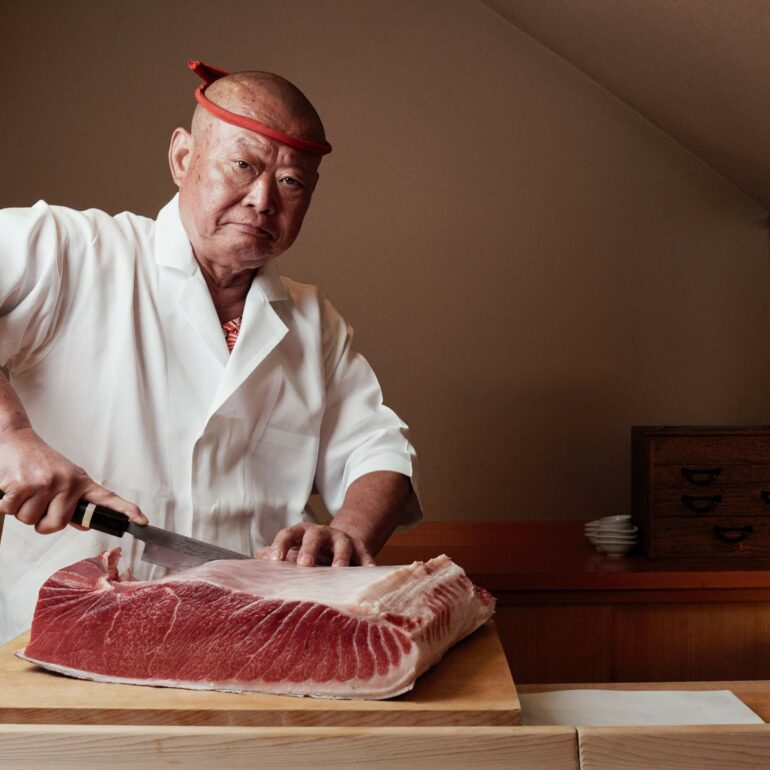 Making portraits of great Japanese chefs is a challenge in itself. Photographer Anoush Abrar took up this task and shares his experience. 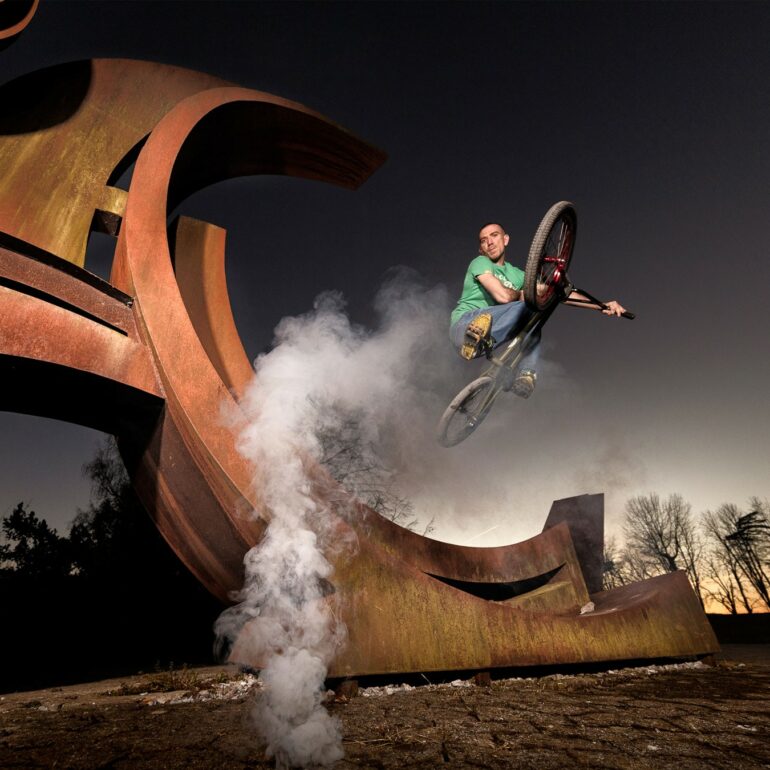 Action photo on a sunday stroll

“Even on a Sunday walk you should always have your eyes open as a photographer!” – Marc Weiler